Imagine you are a young person living in a community where the poverty rate is 40%, where alcoholism, tobacco use and juvenile crime are rampant, and your community is overwhelmed by many other health, social and economic issues. Just for a moment, put yourself in the shoes of that young person trying to grow up in such a community. You might feel hopeless or even depressed thinking about your future. This is the situation facing many of the children and teenagers who are members of the Ute Mountain Ute Tribe (UMUT). In addition, the UMUT also faces high rates of school dropouts, substance use, juvenile incarceration and teen suicide. These issues contribute to bringing down the average life expectancy of tribal members to only 55 years of age. Native American tribes all over the country are suffering from similar challenges, making it a national crisis. I want to share an example of how applying a strength and passion-based approach to education can mobilize the tribe’s young people to lead their own solutions for a better future.

Beverly Santicola, a consultant to the UMUT and a two-time winner of the Purpose Prize Fellowship for her Growing RURAL/Growing SMART (GR/GS) curriculum, has recently taught this youth-led rural development program to a group of UMUT teenagers. The program guides teens through a six step problem-solving process to identify issues in their communities that they care about. While working with the UMUT, Beverly integrated a passion- and strengths-based approach adapted from my book The Boomerang Approach.

Beverly reported that UMUT youth participants responded enthusiastically to the process they followed during the three day GR/GS workshop. The students came up with solutions in support of the vision and strategies of the tribal council which had evolved from the Ute Mountain Native National Partnership Retreat. This retreat had been a four day event earlier in the year, where members of the UMUT tribal council met with national partners and government agencies to develop socially innovative solutions to address economic, health, education, and social issues.

During the GR/GS workshop, students were asked to come up with Youth-led Solutions that address the Community Needs they care about most. They were guided through a process of identifying their Strengths and Passions, and planning engaging activities that were at the intersection of these three domains, as shown in the diagram below. 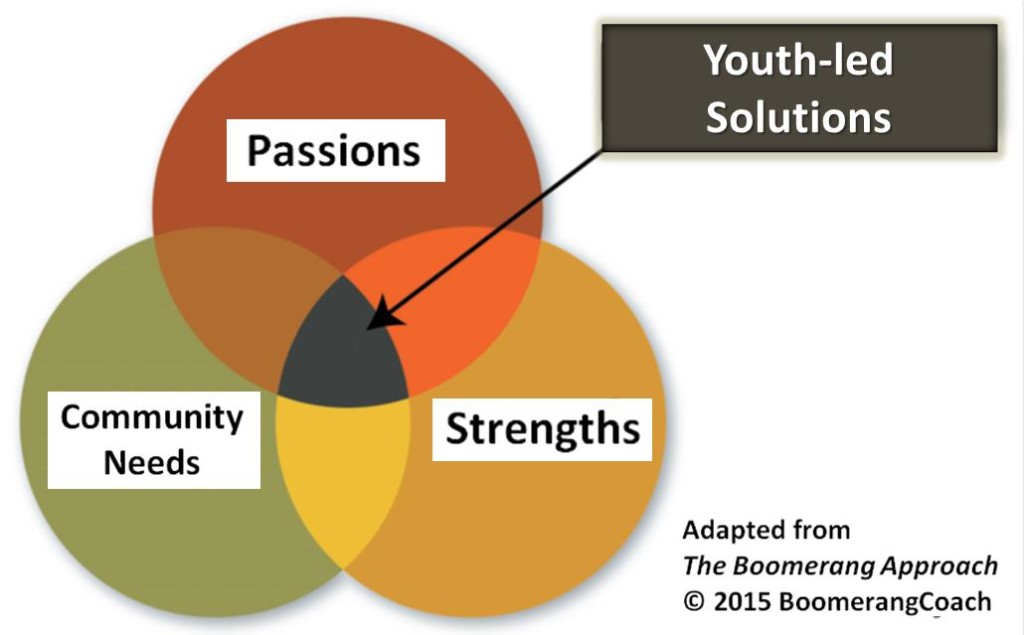 The Community Needs this group of tribal youth were most concerned about were:

Similarly to the tribal council, which is comprised of parents, grandparents and community leaders, the UMUT youth identified their collective Strengths as:

The group of students recognized their Passions as:

Building on the Community Needs, their Strengths and Passions, the group came up with a number of Youth-led Solutions, including:

By the end of the three day Growing Rural/Growing SMART workshop, twelve highly-engaged, young leaders had learned strengths-based problem solving, team building and grant writing. In fact the group wrote two grant requests for $2,000 to launch their first project. When Beverly asked the students if they felt ready to help her teach the Growing Rural/Growing SMART curriculum to other Native American youth groups using this strengths and passions-based approach, the answer was an enthusiastic “yes.” In fact, Maraya Killsmall (featured in the photo above), said “I’m used to speaking publicly. We can do it!”

By July 2015, the youth had filmed their first documentary called “Escape” working in collaboration with Films by Youth Inside. “The youth’s previous work on important life skills such as: team work, collaboration, goal setting, and communications in the GR/GS workshop helped them work efficiently under a very high pressure deadline during the making of their film. They completed a deeply compelling and touching film which was both therapeutic and transformative for them. I am proud of them all,” said Alex Munoz, founder of Films by Youth Inside. “I’m optimistic about the future of the Ute Mountain Ute Tribe because the students showed me they care deeply about their community.”

In follow-up training sessions, these young people learned how to implement, expand and enhance their projects. Going forward, they will also be trained on how to apply for online foundation grants. All of these student-led activities are steps towards Tour de Ute, a strengths- and place-based vision for creating a sustainable and thriving community.

Why did the tribal youth respond so positively to this approach?

One reason is the focus on their strengths and passions. These young people are proud of their community, their families, and their culture and they want an opportunity to show the world their resilience and ability to overcome adversity. Through the Growing Rural/Growing SMART workshop, these Native youth leaders were empowered and grew confident in their abilities to make things better for their community. Having tribal leadership to support their well-planned projects also gives them hope for a better future for the Ute people. Lastly, the invitation to teach other tribal youth leaders gives them an inspiring purpose: to positively impact the lives of other rural Native communities just like theirs.